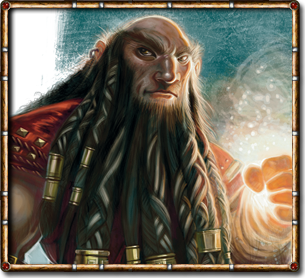 "If it needs doin', then we best be doin' it. No reason to put off to tomorrow what can be done today."

Siggrun isn't the oldest member of the party, since there are two elves. But he certainly looks the oldest. Siggrun has been adventuring for a while, but recently came down with a bit of bad luck. His axe broke, his armor was ruined when he had to leave it at the bottom of a lake, his pony was killed and sacrificed to a goblin demigod while Siggrun ran for his life. All that Siggrun has left is his shield (which needs some serious dents worked out of it and the corner was ruined by something like acid) and some gold that he used to resupply, so now even that is gone.

Siggrun isn't the sharpest knife in the drawer, but he's amazingly patient with his party and works very, very hard. He feels most at home underground, but even above ground, he rarely complains. He mends things, even though he isn't too good with his hands. But, he's patient, and that often wins battles when stitching things together or mending broken things. Mostly, Siggrun takes satisfaction in the doing of a thing, in finishing something and being able to step back and admire the change he was able to bring to the world through his efforts.

For a cleric, he certainly isn't very mouthy about his religion. He seems to prefer spreading his religion by example rather than proclamation. Nobody's too sure about how his deity takes this approach.

(Siggrun is convinced there really is a dwarf egg).

Good
When you put the dead to rest or bring a friend back from the brink mark XP.